It’s All About The Bass! 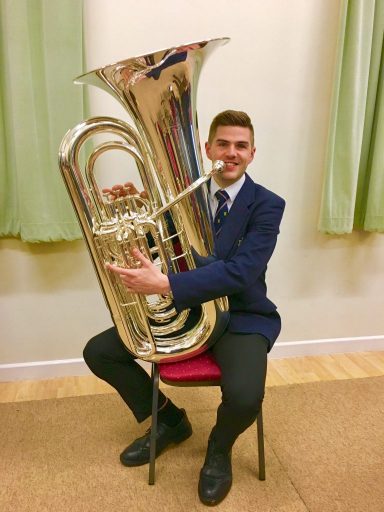 Bilton Silver band has secured the purchase of a Yamaha Neo for its principal BBb bass player and band sergeant, Matthew Moran. With a list price of over £6000, the band has been exploring many avenues of fund-raising during the past couple of years, including selling old instruments, and nearly £1,000 has been raised through the band’s EasyFundraising account (http://easyfundraising.org.uk/causes/biltonsilverband). There have also been a number of substantial donations made by friends of the band, who wish to remain anonymous – the band’s management wishes to express their extreme gratitude for their continued support.

The new tuba replaces a Besson Sovereign BBb, which has been part of the band’s history for over 20 years. With its peeling silver plating and dented piping, it was deemed a worthy investment to replace it, in order to maintain the band’s image and quality sound as top-section performers. The Besson is far from being destined for the scrap yard just yet though; it is due to be donated to the training band for use by up-and-coming tuba players.

Many of the band’s players have bought, and play, their own instruments; however, some of the larger and more expensive instruments are bought and owned by the band. “Without the help of the band’s fundraising & support I would never be able to afford the expense of a new tuba. Even a decent second hand instrument costs in excess of £2,000”, Matthew said. “The old Besson is the only tuba I have played at Bilton Silver, so it will be sad to see it replaced, but it has served both me and the band very well. I am glad to see it being “recycled” into the training band here at Bilton Silver.”

When questioned on the initial thoughts about the new instrument, Matthew commented, “I met with Simon Gresswell, who helped design the Yamaha Neo – he introduced me to the instrument last year. It’s a relatively new design which only started being produced in 2013. I was fortunate enough to be lent instruments and have a two hour rehearsal session on both the Yamaha Neo and a new Besson Sovereign. For me, the winner was clear.”

The basic design of the tuba hasn’t really changed in well over 50 years but Yamaha have tweaked and refined it with this latest model. Whilst the bell is slightly larger than the Sovereign’s, the overall width and weight have been reduced. The 4th valve has also been relocated to make it easier to reach for those with shorter arms. Matthew added “I am extremely pleased with it and am looking forward to the year of contesting and performing ahead!”.