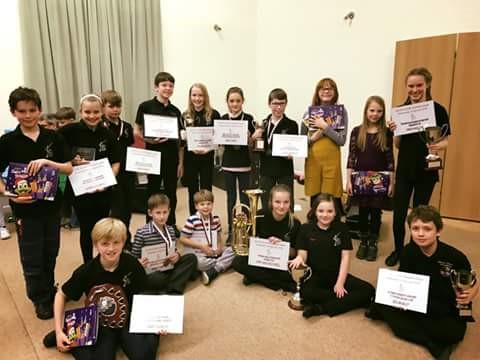 It is not unusual to find Bilton Silver Band Hall bursting at the seams with young talented brass players and Sunday 4th December was certainly no exception!

On arrival of special guests and family members for ‘Celebration of Success 2016, the event was opened by young and not so young soloists who bravely took to the stage to entertain guests, setting the scene for the presentation of the Awards for Mini Brass, Training Band and the new 4th Section Contest Band.

Reflecting on attendance, effort, progress and achievements throughout 2016, the President’s Trophy for Training Band Person of the Year was presented to the talented young trombonist, Rebecca Williams.

As well as presenting his trophy, our most generous Band President, Bev Robotham, donated a new shiny Tenor Horn to assist the progress of the delighted and talented Solo Horn player, Daisy Knell.

Congratulations also went to 4 young members who have recently auditioned for The National Children’s Brass Band of Great Britain with the popular WINABEAR prize going to Vice Presidents, Joan and Dennis Graham.

TRAINING BAND PERSON OF THE YEAR 2015