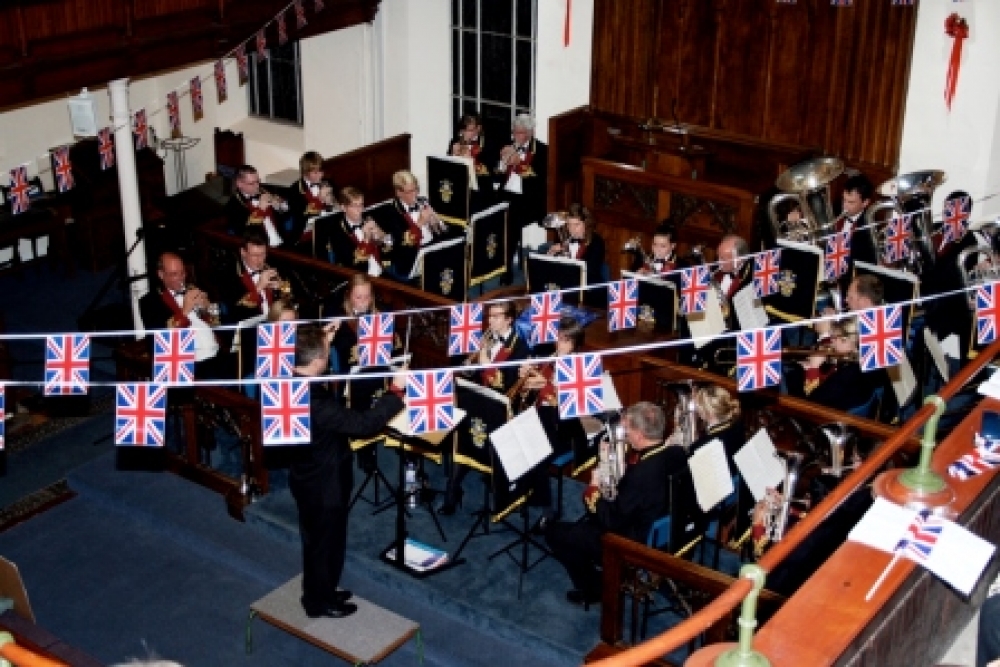 Bilton were delighted to attend (for the 17th consecutive year) the Old Meeting United Reformed Church in Bedworth for our annual Remembrance and Proms concert last Saturday evening.  The band, as always, were looked after very well with refreshments for everyone being provided after we set up and did our sound checks.

Two perspectives from the concert:

At 7.30pm the band took their seats and opened with the rousing ‘633 Squadron.’  The atmospheric Canterbury Chorale followed, which is a favourite piece of the band. We enjoyed much applause by the appreciative audience for all our performances.

We were delighted once again to have the talented Liz West as guest vocalist for the evening, her first half treats were The Shepherd’s Song and You Raise Me Up.  The audience were also in fine voice singing the wartime favourites selection which included Daisy, Wish Me Luck As You Wave Me Goodbye, It’s a Long Way to Tipperary, to name but a few.  The band themselves enjoyed a bit of a ‘sing song’ when performing our version of The Mill in the Dale, much to the delight of the audience!

‘Evergreen’ soloist Paul Bennett (Solo Horn) played beautifully and his encore of Le Basque played from ‘on high’ was memorable.

The band then rounded off the first half with the lively and entertaining Cossack Wedding Dance, which was very well received!

Second half highlights were the rousing concert march Eagle Squadron, Liz sang an arrangement of Oh My Beloved Father and our very own Laura Moran joined Liz in her encore for Pie Jesu, which was beautifully sung and thoroughly enjoyed by all assembled.

The Proms favourites then followed with the singing being led by Liz and the talented audience were sounding excellent!

Finally, the standard bearers were in attendance for the act of remembrance as the band played Nightfall in Camp.

The band returned to the Old Meeting United Reformed Church in Bedworth on November 10th for the 17th consecutive year.  The band was delighted to support the church again, and was very pleased with the appreciation clearly expressed by the audience throughout the concert.

The initial challenge for the band was to find enough spaces around the altar to sit down!  Some unconventional alterations to the usual band formation provided the solution, and Mark also managed to remain precariously balanced on a small table for the duration of the concert without falling off – well done!  A packed and varied programme ensued.

The programme started with 633 Squadron, and what is probably one of the band’s favourite pieces for 2012 – Canterbury Chorale.  Some delightful singing by Liz West followed with Shepherd’s Song, and You Raise Me Up.  The Flugel solo played at the beginning of that, was, as always, stunning (nice one Judith).  We then featured our prize-winning tenor horn solo player (our very own Mr Paul Bennett in case anybody isn’t sure!).  A superb rendition of Evergreen was followed, having eventually made his way to the balcony, by a rapid but beautifully-controlled La Basque.  The Mill in The Dale sounded a treat with some exceptional singing by some of the band members (we daren’t not sing properly for fear of serious complaints from the MD!).  Cossack Wedding Dance completed the first half, moving at a rate which some of us think was faster than we had ever practised it before – very exciting …

The second half started with the march Eagle Squadron.  Liz joined us again for O My Beloved Father, and the duet Pie Jesu, joined by Laura Moran (having managed to find her way across the obstacle course to the front of the band!).  The programme then moved into the proms theme, with the old favourites including Jerusalem, Rule Britannia and Pomp and Circumstance.  Flags and singing a-plenty gave the concert a real buzz.  Evening Hymn and Last Post: Nightfall in Camp provided a superb backdrop for the act of remembrance performed by members of the RBL.

Thoroughly enjoyable concert for both the band and the audience – we hope to return again next year.