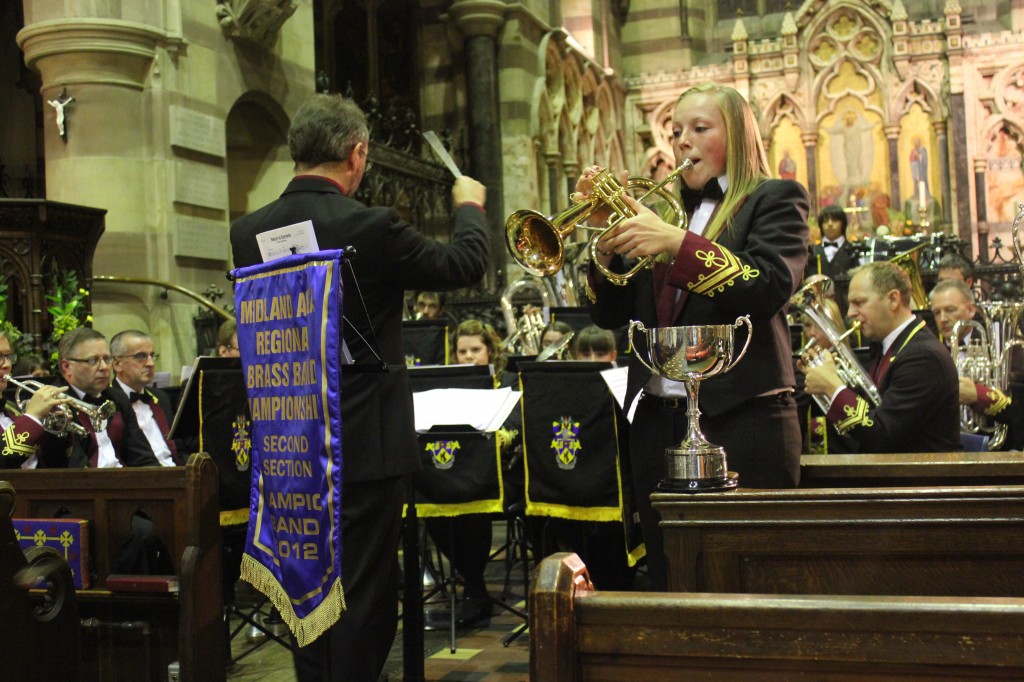 There is always an air of anticipation within the Band when performing at a new venue. This anticipation was somewhat heightened with the prospect of performing a concert in the magnificent surroundings of St. Andrew’s, Rugby.

The Band completed its customary ‘warm up’, prior to the main event, to accustom itself to the acoustics and organise the logistics regarding soloists’ playing positions. It became apparent from the very first note that the acoustic would be superb and certainly was in keeping with the wonderful architecture. With the warm up complete we awaited the appointed starting time of 7:30 excited by the prospect of delivering an entertaining programme to a discerning audience. As the start time neared it was very encouraging to see a sizeable audience taking their seats with the added bonus of many new faces.

The Band received a very warm welcome, and following the initial safety notices, struck up with the ever popular Dambuster March. This seemed very popular and set the tone for the evening from a very receptive audience.

The varied programme included many popular pieces which really demonstrated the sonorous sounds of the Band. Pieces like Breezing down Broadway, Canterbury Chorale and Portuguese Party showcased many different styles and tempi.

Soloists for the night included Alister Rowe, Jodie Fisher, Paul Bennett and vocalist Laura Moran with a Euphonium duet performed by Neil Kelsall and Samantha Edwards. There was also a Trombone trio to enjoy which featured Laura Moran, Simon Titcomb and Greg Little. They were all superb and received extended applause from the audience.

Greg Little also carried out his Band Chairman duties by presenting framed pictures to Keith Fisher & Stan Cunningham which captured the moment they opened our new Bandroom. This was a special moment as each of these gentlemen have been members of the Band for over 60 years.

The Band was also very proud to display trophies and banners at the concert. These were awarded to the Band for winning the Midlands Area Contest, and claiming runners-up spot and best soloist, Paul Bennett, at the National Contest – what a very special year for the Band with such excellent results and a new Bandroom!

Following the exciting climax of the last piece, Madrigalum, by Philip Sparke, it was clear that the audience wanted more. The encore, Lord of the Dance, echoed through the church to further rapturous applause.

The Band left the stage feeling that it was ‘job well done’.

Our thanks go to John Pacey & Jayne Farrow for their help.

Based on such a successful event there will surely be another St Andrew’s concert.