“Oh, we do like to be beside the seaside…” 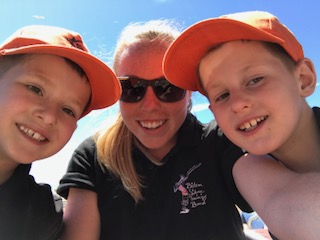 “I think we should have a trip to the seaside”, said Jodie Fisher in July last year, and on Saturday 10th June, Bilton Silver Training Band did just that!

Jodie came up with the idea of a fun day out for Training Band members, to include an opportunity for the band to perform together, which was funded by a Sponsored Walk that the Training Band completed in 2016 – covering a whopping 1000 miles between them.

At 7am, a double decker coach left the Bilton Silver bandroom loaded with Training Band members, family and supporters, and with the luggage compartment crammed full of instruments.

Arriving on the beach, and joined by more families who had travelled down by car, the collective of over 100 people enjoyed a paddle in the sea and a game of cricket on the beach (and in some cases a glass of Prosecco on the pebbles!), followed by lunch on the seafront.

The band then performed a 70 minute concert on Brighton Pier, having been given kind permission by the pier managers. The programme, conducted by Di Fisher, Training Band Musical Director, consisted of upbeat numbers and favourites such as the Disney classic, ‘The Bare Necessities’ and ‘Zambesi’ and also included ‘I’m Gonna Be (500 Miles)’, which has become the band’s trademark tune. A large and appreciative audience gathered, applauding and cheering, giving the members a real boost. The band also received generous donations of £250, which were very gratefully received. It certainly proved to be a huge success, with the true talent and spirit of Bilton Silver Training Band and their great supporters shining through.  A final trip to the Amusement Arcade finished off a fantastic trip.

“Everyone loves seeing their children perform, it’s just a great feeling when all that practice and nervous energy comes together and they get up there in front of a crowd – it’s wonderful. But the real star of the show was not our child or anyone else’s, it was the whole band. In fact it was more than that, it was the whole day. It was a great community event made possible by a bit of ‘get up and go’ and a lot of sheer hard work and organisation by Di and Jodie. Great work!”.