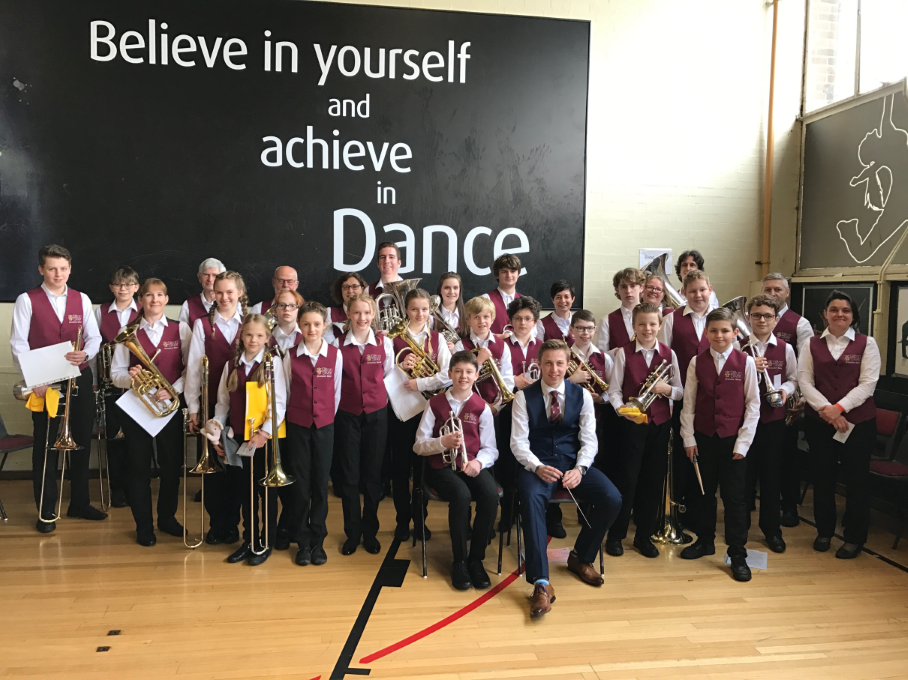 Bilton Silver’s policy on investing in youth is no secret and on Sunday 12th March the new Bilton Silver Evolution Band took to the stage in the 4th Section of the Midlands Area Contest.

Arriving at Bedworth in their new walking out uniforms, bearing their own Evolution Band logo, sponsored by Multimania Ltd (Jodie and Diane Fisher), excitement was running high. Backstage Liz Murray, Evolution band Secretary, ensured that all documents were in order and arrived with her ‘wardrobe on wheels’, full of new made to measure stage uniform waistcoats, sponsored by InXpress (David and Liz Murray). Distribution of the correct sizes created even more excitement among the younger members, and players were wearing their new uniforms with pride, looking a credit to the Bilton Silver name.

Under the Musical Direction of long term Bilton Silver (Rugby) Band member Jack Fisher, still only 19 years of age himself, their entry into the 4th Section of the Midlands Area Contest produced a performance to be proud of and resulted in the biggest cheer of the day.

Going on the stage with just a desire not to come last, being placed 13th out of 21 bands was a great achievement and Jack was both delighted and surprised, considering that the competition was against several well established bands, predominantly full of adults.

“I am very proud of what the band has achieved and would like to thank Bilton Silver Band Committee for their support.

To be placed 13th on our contest debut was a fantastic result and one that we have worked very hard for. It is now important to develop on that performance and improve, ready for our concert in June and a contest later this year.

I would like to particularly thank our uniform sponsors, InXpress and Multimania Ltd. for their generosity and support.

The future is certainly bright and I am very excited about the opportunities it will bring.”